Roughing It In Sussex County 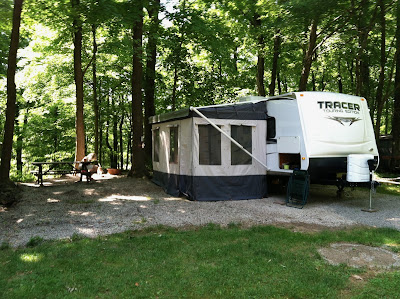 A simple move of the trailer from Freehold, to our new seasonal spot The Great Divide in Sussex County, became a little less simple. When we arrived at storage I found the power tongue jack that is used to raise and lower the hitch didn't work. Battery dead. Ok, now what? What could I have left on? I checked every light switch the last time we left along with the refrigerator? We went to Home Depot and picked up a mobile power station that can charge a battery or be used as a 110 ac in an emergency but it wasn't working? What could be wrong? By now we had been there from 11am and it was around 12:30. I even called Scott's Trailer to be sure I didn't forget something and no luck until I went back and checked the refrigerator. Bingo. It seems although I did turn it off I forgot to switch off the "auto" button that tells the refrigerator to look for gas if the electric is off. Although I turned off the gas it just kept looking for it. As soon as I turned it off the battery started to charge. Wait! This story isn't over yet. While it was hooked up from the charger to my acc plug in the back of the Jeep it was charging fine but to hitch up I needed a longer acc plug. The one that came with it was too short! You can't make this stuff up. It is now around 2pm. Am I aggravated yet? I had hoped to be in Sussex by now. We got back in the Jeep and drove to a few places (more time killed) for a accessories extension, found it, hooked it up, and was able to raise and lower the hitch, finally, while it charged. We had thought about just moving the trailer on Sunday but we decided to make the 90 minute drive and we arrived at 5:30. We backed in and set up on this beautiful site for the rest of the season. Glad we did as I write this the next morning. The picture above taken with the new Nikon D7000 shows the size of the site.